The 401(k) generation is beginning to retire, and it isn't a pretty sight.

The retirement savings plans that many baby boomers thought would see them through old age are falling short in many cases.

The median household headed by a person aged 60 to 62 with a 401(k) account has less than one-quarter of what is needed in that account to maintain its standard of living in retirement, according to data compiled by the Federal Reserve and analyzed by the Center for Retirement Research at Boston College for The Wall Street Journal. Even counting Social Security and any pensions or other savings, most 401(k) participants appear to have insufficient savings. Data from other sources also show big gaps between savings and what people need, and the financial crisis has made things worse.

This analysis uses estimates of 401(k) balances from the end of 2010 and of salaries from 2009. It assumes people need 85% of their working income after they retire in order to maintain their standard of living, a common yardstick.

Facing shortfalls, many people are postponing retirement, moving to cheaper housing, buying less-expensive food, cutting back on travel, taking bigger risks with their investments and making other sacrifices they never imagined. 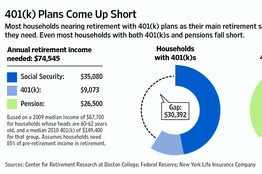 "Inevitably, we find that, for the average person, there is not enough there," says financial adviser Paul Merritt of NTrust Wealth Management in Virginia Beach, Va., who has found himself advising many retirement-age people with too little savings. "The discussion turns out to be: What kind of part-time work do you want to do after you retire?"

He has clients contemplating part-time work into their 70s, he says.

Tax-deferred 401(k) retirement accounts came into wide use in the 1980s, making baby boomers trying to retire now among the first to rely heavily on them.

The problems are widespread, especially among middle-income earners. About 60% of households nearing retirement age have 401(k)-type accounts, according to government data, and those represent the majority of most people's savings. The situation is less dire for those in a higher income bracket, who tend to save more outside their 401(k) accounts and who have more margin for error if their retirement returns fall below the recommended 85% figure.

Steven Rutschmann, 60 years old, manages the buildings and grounds at a Midwest research facility. His employer recently offered him a bonus if he retired early.

Mr. Rutschmann's 401(k) is well into six figures. His wife has a 401(k) and expects a small pension from her nursing job. An outdoorsman, he dreams of spending time hunting, fishing and hiking.

So he consulted a financial planner at Ernst & Young and learned that even with the bonus, his savings could run out before he turns 85. Now he expects to work for several more years.

"I was disappointed," says Mr. Rutschmann, whose 401(k) balance was damaged by the financial crisis and who still has a large mortgage.

In general, people facing problems today got too little advice, or bad advice. They didn't realize that a 6% annual contribution, with a 3% company match, might not be enough.

Some started saving too late or suspended contributions when they or their spouses lost jobs. Others borrowed against 401(k) accounts for medical emergencies or ran up debts too close to their planned retirement dates.

In the stock-market collapses of 2000-2002 and 2007-2009, many people were over-invested in stocks. Some bailed out after the market collapse, suffering on the way down and then missing the rebound.

Initially envisioned as a way for management-level people to put aside extra retirement money, the 401(k) was embraced by big companies in the 1980s as a replacement for costly pension funds. Suddenly, they were able to transfer the burden of funding employees' retirement to the employees themselves. Employees had control over their savings, and were able carry them to new jobs.

They were a gold mine for money-management firms. In 30 years, the 401(k) went from a small program to a multi-trillion-dollar industry supporting thousands of financial planners and money managers.

But a 401(k) also requires steady, significant savings. And unlike corporate pension plans, which are guaranteed by the U.S. government, 401(k) plans have no such backstop.

The government and employers aren't going to pay more for people's retirements. Unless people begin saving earlier and contributing more to their 401(k) plans, advisers say, they are destined to hit retirement age with too little money.

Recently, Vanguard has begun urging people to contribute 12% to 15%, including the employer contribution, because of the stock market's weak returns and uncertainty about the future of Social Security and Medicare.

Plans of younger people have been affected too. Of those 45 to 59 who had substantial retirement assets prior to the downturn, 40% planned to work longer, according to a study by the Center for Retirement Research.

Gloria Moss has been contributing to a 401(k) since 1985, when she went back to work after having children. Especially after divorcing, she wasn't able to contribute as much as she wished and when her children finished college, she focused on repaying college loans. She says she lost more than half her savings in the recent financial crisis, then shifted heavily to bonds and missed the stock rebound.

"I thought I was doing the right thing, and found out otherwise," she says. When she consulted a financial adviser, "I got a report that said, 'You have a 5% chance of reaching your retirement goal'."

To retire at her current standard of living, she figures, she needs nearly twice the savings she has now.

Dr. Moss, who has a Ph.D. in education, also made good decisions along the way. She saw trouble coming at the educational software company where she worked and found a new job a week after losing hers.

Now she has sold the condominium she loved, near the Atlantic Ocean, and moved to a cheaper house. She cut back on vacations and meals out. She adores the theater but hasn't been to a play in at least a year.

She works extra hours each week and contributes to her employer's version of a 401(k), but doesn't feel financially able to contribute the maximum amount.

"I am going to probably have to work considerably longer than I anticipated," she says. "It is a nice job but I had not planned to be working well into my sixties," she says. "A lot of people are doing that. They need the money."

It isn't possible to calculate precisely how many people are able to cover the recommended 85% of their pre-retirement income, but Federal Reserve data suggest that many people can't.

Consider households headed by people aged 60 to 62, nearing retirement, with a 401(k)-type account at their jobs.

Such households had a median income of $87,700 in 2009, according to data from the Center for Retirement Research at Boston College, which derived this and other numbers by updating Fed survey data, at The Journal's request. The 85% needed for retirement would be $74,545 a year.

Experts estimate Social Security will provide as much as 40% of pre-retirement income, or $35,080 a year for that median family. That leaves $39,465 needed from other sources. Most 401(k) accounts don't come close to making up that gap.

The median 401(k) plan held $149,400, including plans from previous jobs, according to the Center for Retirement Research. To figure the annual income from that, analysts typically look at what the family would get from a fixed annuity.

Some families do have other income. Just under half expect pension income of a median $26,500 a year. Added to the $9,073 in 401(k) income, that still falls short. Some families have other savings, but Federal Reserve and other data suggest that those don't fill the gap for most people.

These data don't even include people who are in the direst situations: Those who have lost their jobs, stopped contributing to 401(k) plans or shifted to jobs without 401(k) plans. The numbers also don't account for inflation, which would further eat into income from a 401(k).

Some researchers question the Fed numbers because they are based on surveys rather than on records of actual contributions.

Jack VanDerhei, head of research at the Employee Benefit Research Institute, a group supported by 401(k) providers, estimates the median person actually has about $158,754, based on data from 401(k) providers. That is based on individuals in their 60s who have been at the same company for more than 30 years, a somewhat different group than that measured by the Fed data.

Even that amount of 401(k) savings generates much less than what is needed.

The difficulties have been worsened by the 2007-2009 financial crisis. Since the housing and financial markets began to collapse, about 39% of all Americans have been foreclosed upon, unemployed, underwater on a mortgage or behind more than two months on a mortgage, says Michael Hurd, director of the Rand Corporation's Center for the Study of Aging.

The financial collapse cut their savings in half and left Mr. Mastej out of work for two years, with no 401(k) contributions. He had to dip into other savings and use up an inheritance to pay the mortgage. He found a new job in a specialty food store, but it paid much less than his old one in a plastics factory.

Today, Mr. Mastej figures he has about $90,000 in savings left, including about $50,000 from the two 401(k)s, now mostly in a fixed annuity that isn't affected by the stock market. He and his wife have canceled their satellite television and drive 11-year-old cars to work.

They buy some food at discounted prices through their church, but are proud they have remained current on their mortgage, home-equity loan, insurance and property taxes.

"We don't go out to dinner. We don't do much entertaining," Mr. Mastej says. "I will probably end up having to work for another 10 years."

Carol Dailey is continuing to work at age 71. Ms. Dailey spent 10 years as an executive assistant at America Online and had stock options she figures were once worth $1.7 million. The options' value collapsed with the company's stock.

Now she relies on her 401(k), which took a hit in the 2008 market plunge. She has cut back spending for entertainment and organic food, and continues to work three days a week as an office manager for an Internet security company.

"At AOL, we were buying $60 bottles of wine and not blinking. Now I drink box wine," she says.

Eventually, she wants to retire completely. Then, to make ends meet, she plans to take bigger investment risks. Her financial adviser then will shift some of her savings out of an annuity and into high-yielding bonds and real-estate investment trusts, aiming to double the return on that money to 10% a year.

Some people were done in by the twin collapses of the housing and stock markets.

Patti and Bob Webster had accumulated a six-figure balance in their 401(k) accounts and were building a dream house in North Carolina in 2007. They planned to retire there in about a year. Then their builder went out of business and the stock collapse knocked 40% off their savings. They temporarily suspended 401(k) contributions.

Today in their mid-60s, they have completed the house but have worked two years longer than planned and expect to work two years more.

"We are having to spend another two years in just trying to catch up with what the market did to us," Ms. Webster says.